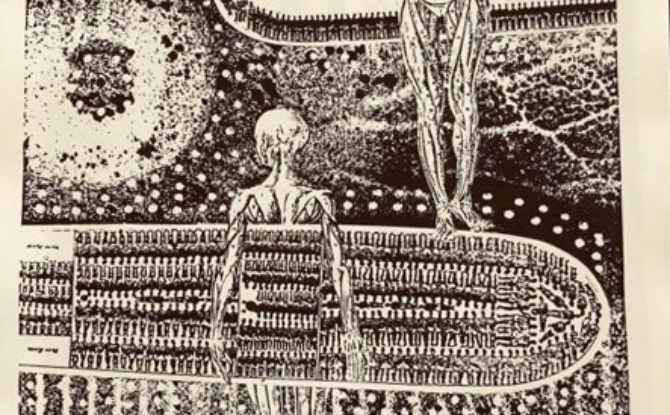 “THE LOSTFOUND: Catastrophe and Memory in Paper Works by Valerie Maynard”

Memory and the Archive 1619-2019 Past/Present/ Future was the theme for the 2019 Black Portraiture event held at New York University.

The panel, “‘The Afterlife of Slavery:’ Visual, Textual, Sonic Arts and Archives of Catastrophic Memory” is set against the backdrop of Saidiya Hartman’s articulation of “the afterlife of slavery” as the enduring calculus imperiling present-day black life. This focus is nourished by Kara Walker’s visual and sonic reading of domestic slavery in the United States as indicative of “a Catastrophe for millions.” Thus the panel forwards critical discussions of visual, textual, and sonic works by black artists engaged, across time, with the practice of re-rendering and re-imagining the impact of transatlantic enslavement as a catastrophic archive of persistent black memory.

In “One,” the artist draws our attention to a barrier, a gate like structure, that symbolizes this ancestral enslavement. And she draws attention to three figures foregrounded against it. With them, she informs our memory of what enslavement did. Enslavement turned captured Africans, humans, into hybrid creatures. It denied and brutalized their humanity, without question. It deformed and dismembered them. Maynard narrates this hybridity, framed by abject brutalization, in two small figures, especially.

Cheryl Clarke will explore the poetry of Natasha Tretheway as Tretheway’s work memorializes slavery by historicizing its “everlasting” effects on black culture and subjectivity. “there to here” Natasha Tretheway’s poem, “Theories of Time and Space,” from her celebrated Native Guard (2006), exposes the poet’s approach to poeticizing historical portraits and paintings (ekphrastic) of black people, specifically mixed race black women, in captivity or various forms of oppressive servitude, including prostitution. In Bellocq’s Ophelia (2002) and Thrall (2012), Tretheway’s getting from “here” (author stance) to “there” (subject/ “Participant”) is historical and personal distance, i.e.; it is the interstices of space, “the space of space.”  The cover art of both works utilize reproductions of photographs and “Casta” paintings; and images of prostitutes, , and mulattoes, pose themselves (and us) for her narrative portraiture. Tretheway sees the camera, photography, and portraiture as one of history’s tricks, with its pandering to our willingness to be fooled, fixing of the past in the present, and its fragility. “This past week I splurged, spent a little of my savings on a Kodak . . . .” (Bellocq’s Ophelia, 28), says the speaker, Ophelia, marking the democratization of the archive. This paper hopes to travel distance from “there to here” in the space of slavery’s afterlife.

Jenna Wortham will make a case for examining the processes inherent to black archives primarily as opportunities to resist the ephemerality of social media and digital transactions, in order to preserve and create a blueprint for engaging the black “present” in a “future” situated in the black “past.”

The Amistad Research Center has additional papers from 1967 to 2016.  The archives mainly consist of correspondence, drafts of original manuscripts, photographs, and ephemera documenting her professional life and work. Correspondence within the collection is professional in nature covering De Veaux’s many speaking and lecturing engagements, publishing, her work as the chair of the Women’s Department at the University of Buffalo, and her work as a graduate student in the late 1980s and early 1990s.

The papers are rich in original drafts and notebooks of De Veaux poetry, novels, and biographies including Yabo, The Unbreakable Threat, and Warrior Poet: A Biography of Audre Lorde. De Veaux’s thesis, This Far by Faith: A Writer’s Autobiography (1989) and Dissertation, Concealed Weapons: Contemporary Black Women’s Short Stories as Agent’s for Social Change, 1960s to the Present (undated) can be found within the collection. Additionally, her published work, Blue Heat: A Portfolio of Poems and Drawings(1985) is available.

The papers also document De Veaux’s teaching life and work as the chair of the Women’s Studies Department at the University of Buffalo, and other institutions through notebooks on teaching, correspondence, student papers and poetry, as well as ephemeral materials such as flyers, posters, programs, and news clippings.

There is a small amount of material in the form of cards, letters, and mementos generated from De Veaux’s long-term relationship with Loyce Stewart, Director of the Office of Equity, Diversity and Affirmative Action Administration.

Of note are conference materials and photographs of the International Women’s Playwrights Conference at the University of Buffalo (circa1990) and the Black Women Writer & the Diaspora Conference in Michigan (1985). Additional photographs are mainly personal, documenting events, such as her book tour in Japan in 1998, Nelson Mandela’s release in 1990 and De Veaux’s travels in Africa, and various events held by the Women’s Studies Department at UB including poet, Paula Gunn Allen’s visit in 1990. Also of note are compact disks for Warrior Poet produced by Out-FM on WBAI 99.5 FM Radio in New York and audiocassettes Black Box 11and Black Box 17, readings by black poets and produced by The New Classroom in Washington, D.C. (undated). Lastly, slides and programs are available for An Evidence of Letters, Alexis De Veaux and Renée Armstrong at Hallwalls Contemporary Art Center in 200.