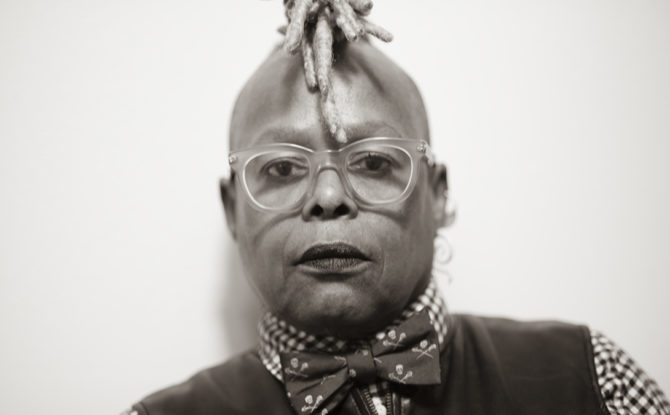 Writing New Worlds a conversation between Alexis De Veaux, Walidah Imarisha and Alexis Pauline Gumbs on legacy, possibility, and the role of writers in making the future we deserve intriguing, imaginable and irresistible. This conversation was a plenary event at the Allied Media Conference, July 23rd to July 26th 2020.

“The conversation between countergenerational artists was an extraordinary defining moment during this time of global pandemics. I was deeply honored to share it with Alexis Pauline Gumbs and Walidah Imarisha”

“THE LOSTFOUND: Catastrophe and Memory in Paper Works by Valerie Maynard”

Memory and the Archive 1619-2019 Past/Present/ Future was the theme for the 2019 Black Portraiture event held at New York University.

The panel, “‘The Afterlife of Slavery:’ Visual, Textual, Sonic Arts and Archives of Catastrophic Memory” is set against the backdrop of Saidiya Hartman’s articulation of “the afterlife of slavery” as the enduring calculus imperiling present-day black life. This focus is nourished by Kara Walker’s visual and sonic reading of domestic slavery in the United States as indicative of “a Catastrophe for millions.” Thus the panel forwards critical discussions of visual, textual, and sonic works by black artists engaged, across time, with the practice of re-rendering and re-imagining the impact of transatlantic enslavement as a catastrophic archive of persistent black memory.

In “One,” the artist draws our attention to a barrier, a gate like structure, that symbolizes this ancestral enslavement. And she draws attention to three figures foregrounded against it. With them, she informs our memory of what enslavement did. Enslavement turned captured Africans, humans, into hybrid creatures. It denied and brutalized their humanity, without question. It deformed and dismembered them. Maynard narrates this hybridity, framed by abject brutalization, in two small figures, especially.

Cheryl Clarke will explore the poetry of Natasha Tretheway as Tretheway’s work memorializes slavery by historicizing its “everlasting” effects on black culture and subjectivity. “there to here” Natasha Tretheway’s poem, “Theories of Time and Space,” from her celebrated Native Guard (2006), exposes the poet’s approach to poeticizing historical portraits and paintings (ekphrastic) of black people, specifically mixed race black women, in captivity or various forms of oppressive servitude, including prostitution. In Bellocq’s Ophelia (2002) and Thrall (2012), Tretheway’s getting from “here” (author stance) to “there” (subject/ “Participant”) is historical and personal distance, i.e.; it is the interstices of space, “the space of space.”  The cover art of both works utilize reproductions of photographs and “Casta” paintings; and images of prostitutes, , and mulattoes, pose themselves (and us) for her narrative portraiture. Tretheway sees the camera, photography, and portraiture as one of history’s tricks, with its pandering to our willingness to be fooled, fixing of the past in the present, and its fragility. “This past week I splurged, spent a little of my savings on a Kodak . . . .” (Bellocq’s Ophelia, 28), says the speaker, Ophelia, marking the democratization of the archive. This paper hopes to travel distance from “there to here” in the space of slavery’s afterlife.

Jenna Wortham will make a case for examining the processes inherent to black archives primarily as opportunities to resist the ephemerality of social media and digital transactions, in order to preserve and create a blueprint for engaging the black “present” in a “future” situated in the black “past.”